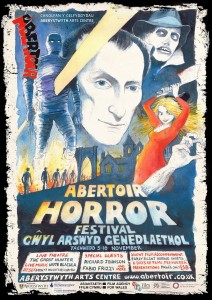 Horror has been popular as a genre in literature, film and television for many years, but more recently, there has been a growing fascination with the genre among artists based in Wales. Reviewer and horror fan, Gary Slaymaker, takes a look at this burgeoning interest, specifically in terms of two specialist events held annually in the country – the Abertoir horror film festival in Aberystwyth, and the Scardiff horror expo held in Cardiff.