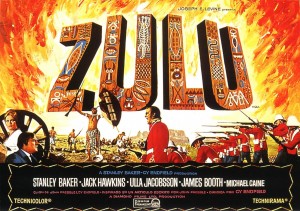 BBC Radio Wales Arts Show, June 2014
A celebration of the 50th anniversary of one of the greatest Welsh films ever made, as well as one of the greatest war films ever made. A personal essay by reviewer, Gary Slaymaker, which salutes the film, while also acting as a tribute to his late father; as Zulu was the first ever film that Gary and his dad saw together in  a cinema.

This site uses Akismet to reduce spam. Learn how your comment data is processed.